Edit
watch 01:54
Obi-Wan Finale - The Loop
Do you like this video?
Play Sound

One hour and a half

A Friend In Need
Defend Santo Domingo is the last storyline quest from the Hispaniola campaign. Leandra's troops will attack Santo Domingo and as such, the market, nursery and all other markers,except for the palace, are gone until the battle is over. If supplies are required, those must be acquired from San Tiago or the two remaining Taino villages or be gained by exploring the map.

In order make progress with this goal, head towards the palace and discuss your results from the final battle with Esteban. In case he is dead, then they are relieved he won't join the battle. In case he still lives, they are concerned whether the player character did the right thing. A few moments later, the alarm sounds of Leandra's troops advancing and then soldiers must take positions. Noriega's troops defend Fortalezo Ozama, while the player character must defend governor's palace from Leandra's troops. Isabela de Yruenes asks to join Noriega and take a few troops with her. This will only exclude Isabela from the list of available troops in the first battle. The troops which are not picked will defend the fort.

In order to improve your odds for the first battle and second battle, it's adviced to do the following:

The first battle is a survival mission, as you must defend the palace from twelve enemies. Five come from the jungle close the palace, while the other seven are heading from the town square to the palace. Most of them are men-at-arms, with a few veterans. The attackers are three soldiers, two doctors, two trappers, two hunters, one scout, warrior and scholar.

When it comes to battle, take out the doctors when the first opportunity arises, especially the veteran doctor. Every turn they live, they can heal or revive units. The lanterns can be used to hurt enemies, but also provide protection from bullets and arrows if used well. The rest depends on the movements of the AI and own insights. Although the odds are against the player, it is possible to obtain a flawless victory by defeating all enemies.

After winning the first battle, head to the fort and see how Noriega´s troops fared against the rebels. In case Isabela and the other troops of the army assisted him, he and Isabela are alive and holding the fort. Then head towards the docks to finish Leandra and the scattered rebels.

Before the final confrontation, it's possible to upgrade troops and change the items that are taken into combat and saving the game.

First battle: 100 experience and one bunch of caltrops.

Left flank, behind the net trap are the positions for fighters. In the center the barricades are placed to provide protection from ranged attack and slow down any melee unit. Right flank is guarded by a scout and the way to the scout is littered with traps 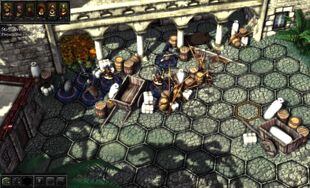 Left flank unchanged. For the centre only three barricades are used. Right flank is also blocked by a barricade. Disadvantage of this formation is that melee units are more likely to destroy the barricades sooner if they can't reach the left flank
Community content is available under CC-BY-SA unless otherwise noted.
Advertisement